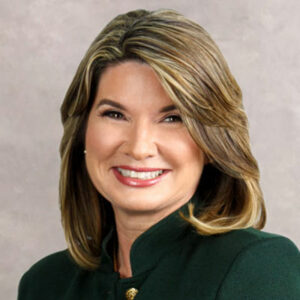 Shannon McLin founded The Carlyle Appellate Law Firm in 1997 after serving as a law clerk at Florida’s Fifth District Court of Appeal. After growing the Firm to seven lawyers with three offices throughout Florida, she opened Florida Appeals in 2019.

Shannon is Board Certified by The Florida Bar in appellate practice and is AV rated by Martindale Hubbell. She is also a Certified Circuit and Appellate Mediator. Ms. McLin has consistently been named by Florida Trend magazine as a Florida Legal Elite in Appellate Practice and as a Florida Super Lawyer. She has also been recognized as one of Florida’s Top 50 Women Lawyers.

“A lot of the cases we work on are not only just very high dollar cases, but also highly emotional cases. We handle a lot of family law cases and adoptions and cases where it’s not just about money, but it really affects people’s lives.”

The Mack is back! Learn about Shannon’s recent name change.

A significant part of Shannon’s practice takes place in trial courts, where she advises trial lawyers and their clients and often serves as additional counsel of record for trial support purposes. When engaged to join a trial team, Shannon assists lead counsel with strategic analysis and briefing, legal research, and potentially dispositive motions, all with a focus on preserving error and positioning cases for appellate review. She also testifies as an expert on appellate issues and attorneys’ fees and serves as a mediator in appellate and select trial-court cases.

Ms. McLin is an experienced appellate advocate with an extensive background in state and federal appeals. As a former law clerk to the Florida Fifth District Court of Appeal, Ms. McLin developed a unique perspective as to what appellate courts expect in appellate briefs and pleadings. Ms. McLin is admitted to practice in Florida state courts, the U.S. Circuit Court of Appeals for the Eleventh Circuit, and the Supreme Court of the United States. Ms. McLin earned her Juris Doctorate with honors from Pepperdine University School of Law where she was Associate Editor of the Pepperdine Law Review. She also earned her B.A. in journalism with honors from the University of Central Florida.

Ms. McLin has lectured and written on issues important to appellate courts and practitioners. Writings include:

Ms. McLin is a member of The Florida Bar, and since 1993 has been a Charter Member of the Appellate Practice Section, where she served on the Executive Council and as a section delegate to the Council of Sections. She is the former chairman of the section’s Outreach Committee and served on the Fifth District Court of Appeal’s Mediation Task Force.